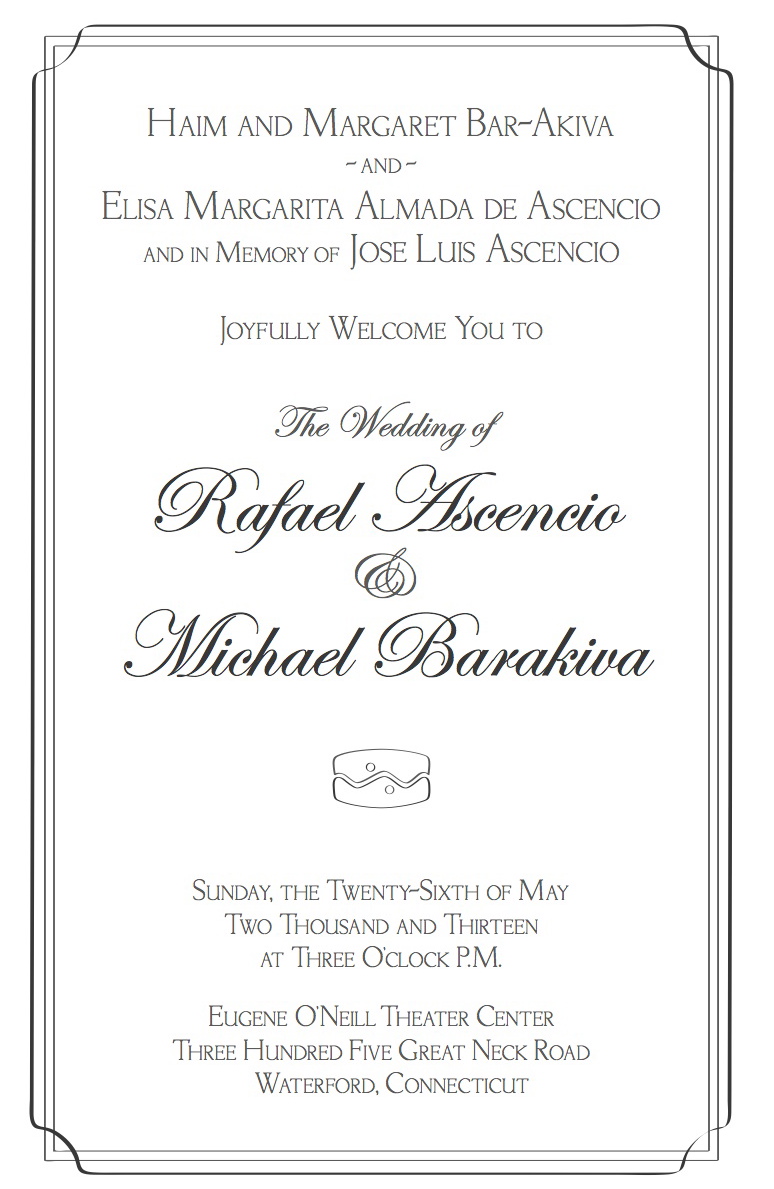 For many reasons, both political and personal, I never thought I'd be married.  And now I am.  I'm still processing the glory of yesterday's experience, and I think it'll be a while before I can write about it with any degree of cogency.  Instead, I'm going to provide the text of the ceremony for those of you who are interested in checking it out, along with the menu and list of people toasting.  I do not have the text of the actual toasts, which is especially unfortunate because they were some of the real highlights for me. 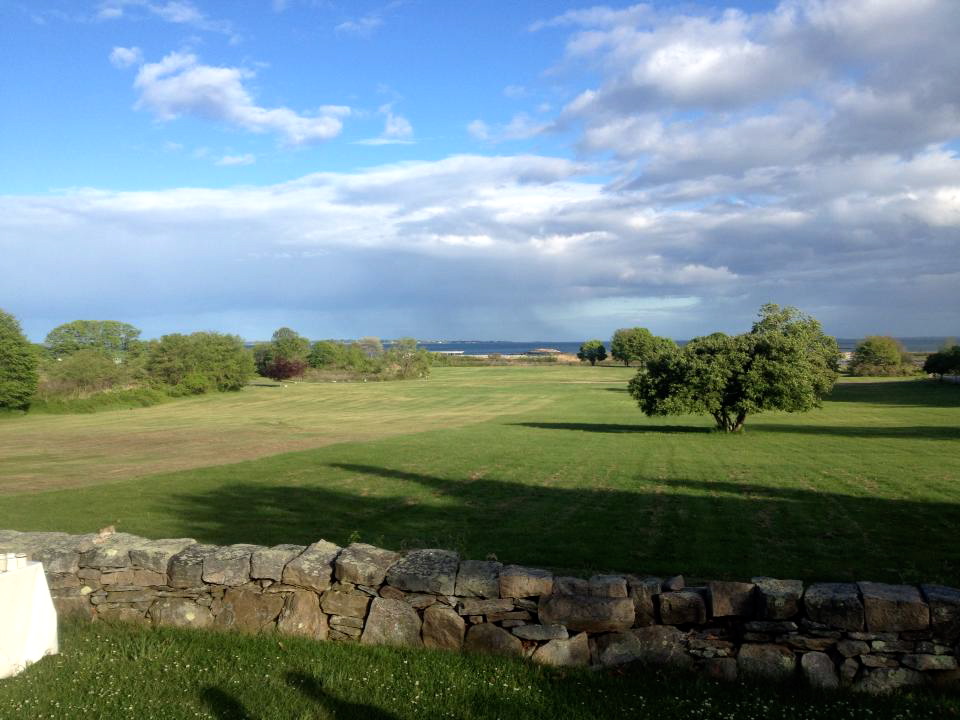 Before I launch into the text itself, however, there are a few thoughts I'd like to share.  Yesterday, I found myself asking: why is getting married important?  I pondered this question in both its gay context and empirically.  I certainly know many couple, gay and straight, who have spent years and decades together without any of the bru-ha-ha of a wedding and I don't think they're any less in love than a married couple.  There is, however, something significant about taking a few hours out of your life and celebrating two people's love for each other.  Standing in front of your community and taking oaths (or, incorporating your community into your oath-taking, as we did) is powerful.  It binds you to your partner, and to your community.  Like in a Racine play, the word is the event and vice versa.  Yesterday, I promised Rafael that I would honor, cherish and respect him.  When next I'm feeling petty or unhappy, I hope to summon the memory of those oaths and use it as a talisman to inspire me to better.  And I do believe that the formality of the event, and its publicity, will make it more potent that if Rafael and I had done it by our lonesome, or without a legal state. 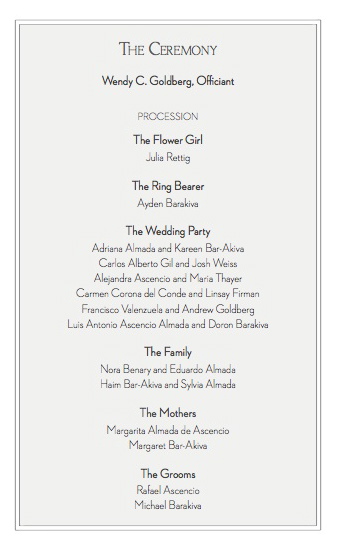 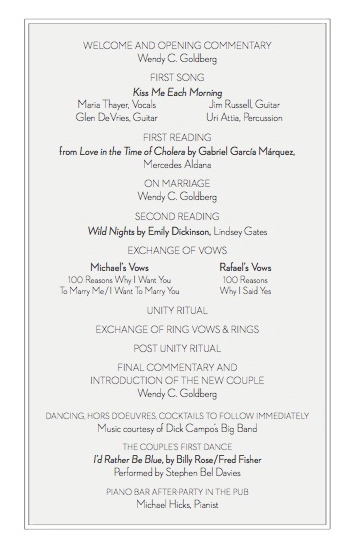 1.        We make each other happy and I believe we will continue to do so for the rest of our lives.

3.        When I asked your brother for his blessing, he gave it and called me hermano.

23.      Our initial connection was passionate.

43.      It has become impossible for me to imagine my life without you.

45.      You understand the quality of value and value of quality.

49.      I’d rather be blue thinking of you than happy with somebody else.

59.      Fatherhood would come effortlessly to you.

80.      You have visited me in Lake George, Poughkeepsie, Princeton, Syracuse, Davis and Rhinebeck.

82.      The world is a place of possibility for you, a place to surprise and be surprised, full of joy and marvel.

87.      We have followed each other, through Central New Jersey and Hell’s Kitchen, for most of our lives.


Rafael was genuinely surprised that day on the bench, one year ago. He had no idea this would be the day for this proposal.  He didn’t immediately say yes, which Michael says, made him “want to hurl my body into the Hudson River”—in his Romantic Hero way.

But a few moments later, Rafael did accept and a few days later, Rafael returned the proposal with a resounding and passionate “100 REASONS WHY I SAID YES.”

Yet again, romantic, inventive and artistic, their proposal and its acceptance was marked with their unique style and homage to Love.

Rafael would like to invite the guests here to recite these reasons, as his vows, to Michael.  If you received a green index card, please take it out now.  Please speak clearly, articulate well, and make sure to say your number so that the next number knows when to go.  Rafael, would you start us off? 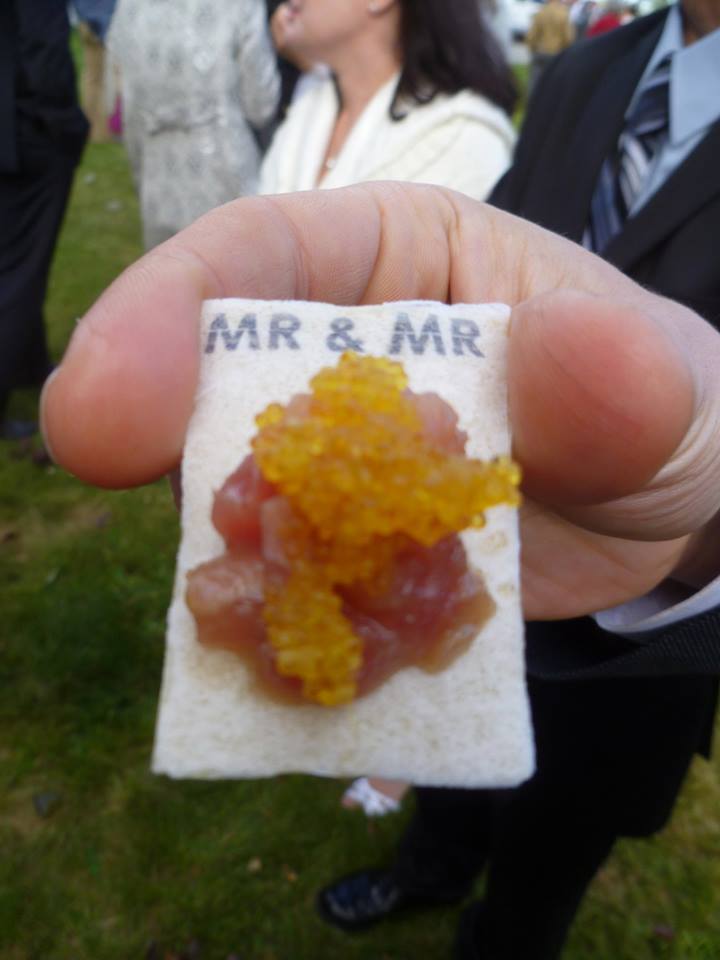 
(At this point, Ana Luisa gets three containers – two contain clear liquids and one is empty vessel.  Rafael and I are each handed one with liquid and she holds the empty one.)


Before you met, your lives were separate roads, each going in a different direction and seemingly leading to different destinations. But you met, fell in love, and today you find yourselves standing together at the entrance of a new path that will forever join your once separate journeys


You each hold a vessel of liquid. Each represents the separate journeys you once were on, as well as your own sets of friends and families that once were apart. When you combine them, it will represent the coming together of your friends and family, through your marriage, into one. And as the two liquids are poured into one container, your once solitary journeys will now be one of companionship, as you walk a single path together into your future.


"I now ask that you pour the liquids together.


(the liquids are now poured, forming a new pink solution)


As the liquid has been joined, your lives are now joined, your separate journeys through life are now one. Your friends and family are as one as well, for now you will share those who are in your lives and will walk hand-in-hand along the path of your marriage - united and strong, as inseparable form each other as this new solution."


Ayden, could we have the rings please?

(Ayden, my nephew, delivers the rings.  I take Rafael’s ring and recite)


Give to you, Rafael


As a symbol of my love and loyalty


to honor, respect and cherish you


In good times and in bad


In sickness and in health


For all of the days of my life.


(I put the ring on Rafael’s finger.  Then Rafael recites:)


By the power vested in me by the State of Connecticut, one of the twelve states in the United States where gay marriage is legal, I now pronounced you married.  You may kiss the groom.


In the Jewish tradition, a glass is broken by the groom on the wedding as a reminder that we must remember temperance even during times of extreme joy.  It has evolved into a more celebratory ritual.


My sister brings a glass wrapped in a napkin and I step on it.)


The meaning of this ancient pagan ritual is that the egg, as a living cell, is rubbed to absorb the evil spirits and purify the soul of the new couple. The egg is then broken in a glass, for new beginnings.


(Ricardo takes an egg, wave it around us, then crack it into a bowl.) 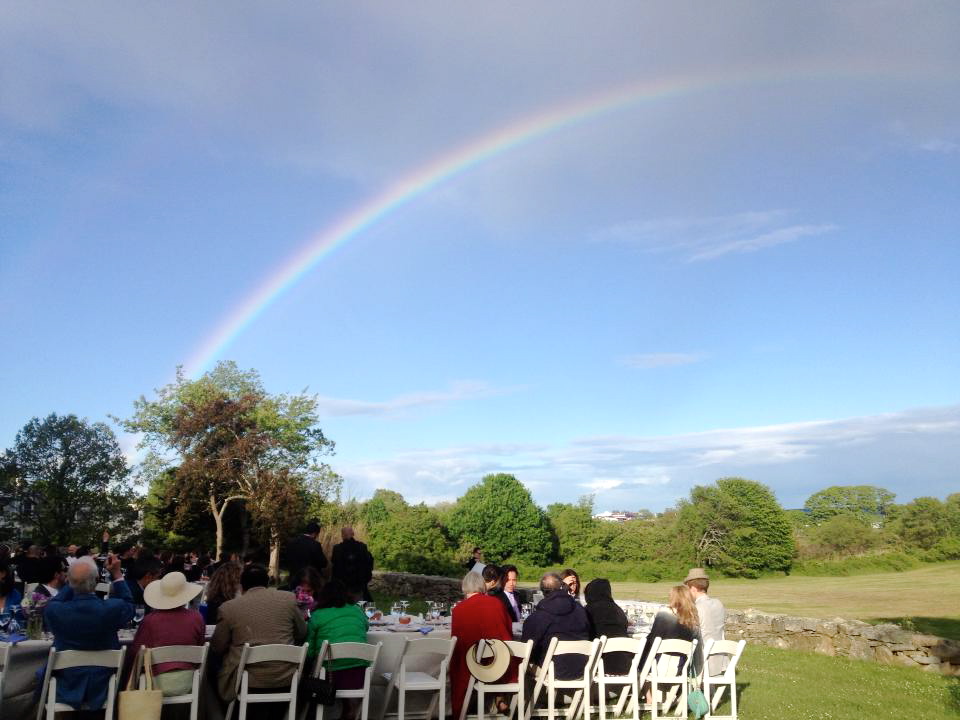 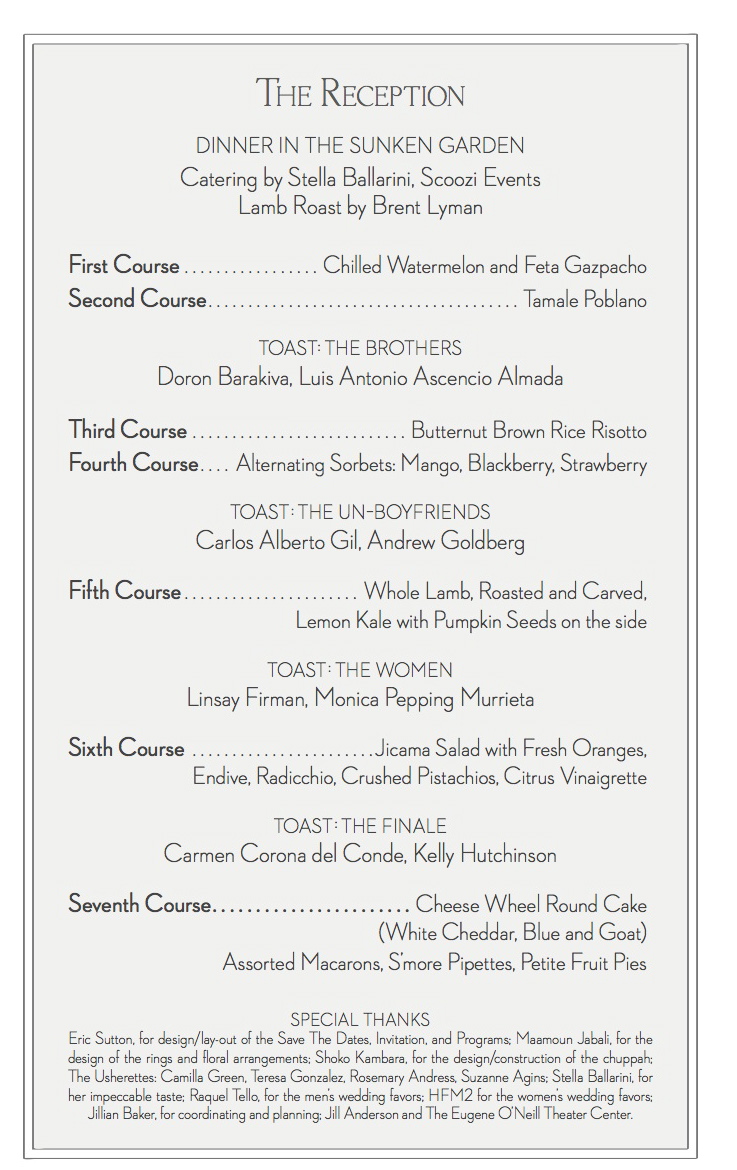 
Michael and Rafael, you both learned to trust each other, you have the blessing of your family and friends and as Janie says in ISN’T IT ROMANTIC:


“All you have to do is trust me a little bit.  I believe a person should have a little originality, a little “you know”—otherwise, you just grow old like everybody else. And you know, I like life, life, life.  Relax and let me figure it out”


May you both continue to figure it out together and


may you both “grow old on one pillow.”