An Open Letter To Meg Rosoff

You have totally missed the point.

I wish I didn't feel compelled to write you this. It has been a long day for me - I started by making a pot of turkey chocolate chili, then attended a preview for Perfect Arrangement, the off-Broadway show I'm directing, then hosted a meeting for my theater company, where I served aforementioned turkey chili. I would much rather be reading about my friends' outrage on Facebook  about the Oregon Shakespeare Festival's project to translate the Bard's 39 plays, or playing board games online, or watching Attack on Titan.  But when someone is so off the mark in a such a public and egregious manner, it demands correction. It is National Coming Out Day, for god's sake. 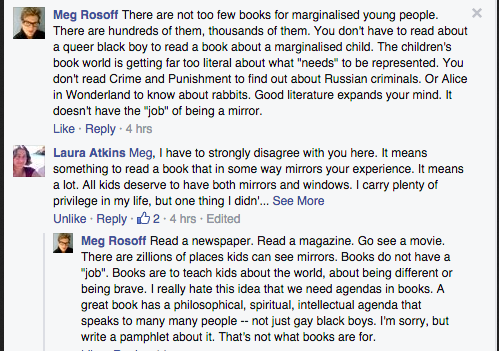 The heart of the matter is that everyone deserves to have the experience of reading about themselves.  Yes, of course, you don't have to be a woman in an unhappy marriage in turn-of-the-century Russia who commits suicide by jumping in front of a moving train to appreciate Anna Karenina.

But if you've never had the experience of seeing and reading yourself in a story, you start feeling like your story isn't worth telling. Which isn't that far from feeling like your life isn't as important as those other lives you keep reading about.

Yes, a great story transports you. A great story makes you empathize and sympathize with people and situations you've never imagined.  I would never follow the advice of three witches and kill the king of Scotland to assume his throne. But yes, in a great production of the unmentionable play, I totally get why Mackers has done it all.

But still, am I wrong for wanting to see queer characters? Armenian protagonists? Non-Israeli Jews? About-to-be-forty-year-olds who have dedicated their lives to the not-for-profit arts and only sometimes regret it?

This is why diversity in story-tellers is so important: so that diverse stories are told authentically.

“Books do not have a job,” you write, then follow up with, “Books are to teach kids about the world.” But isn't that a job? Why do you feel like your definition of a book's job is more valid than someone else's? And since queer black boys exist in the world, wouldn't it behoove a non-queer, non-black boy to read about that character's perspective to learn about the world?

This isn't an "or". This is an "and." Books can teach about the world AND expose us to infinite perspective and character, AND change the world, AND help me get through my rehearsal process, as all 1400 pages of N. K. Jemisin's beautiful Inheritance Trilogy just did. Let books be everything.

Posted by Unknown at 6:57 AM 3 comments: Links to this post