Post #3: On My Decision To Pursue and Then Later Accept The Position of Artistic Director At The Hangar Theatre - The Application Process

Around five years ago, I decided to start applying for small Artistic Director jobs.  The response, uniformly, was a chorus of crickets.   And then, about a year ago, it’s like the PTB decided to take pity on me. (PTB = Powers That Be. Points if you could place the Buffy reference.)  “The guy’s about to turn 40,” I imagined them saying with slight condescension, “We might as well call him.”  Part of this newer response, I’m sure, had to do with having reached a threshold of experience (imagine me singing a gin-soaked “I’m still here” in a slinky number).  But also I had the fortune of applying to institutions with which I was familiar.  This meant I could write application letters that weren’t just regurgitations of my resume in prose form.  Instead, I could write about the directions in which I could help lead them.  What my vision for them would be, per se.

Here was the letter I wrote to the Hangar (you can just skip it if you want, but I certainly never got to see one of these before I had to write one, so why not, I figured, make it available for public viewing?). 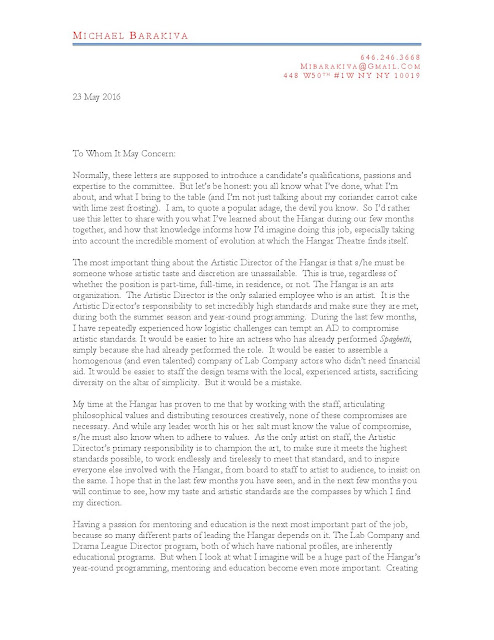 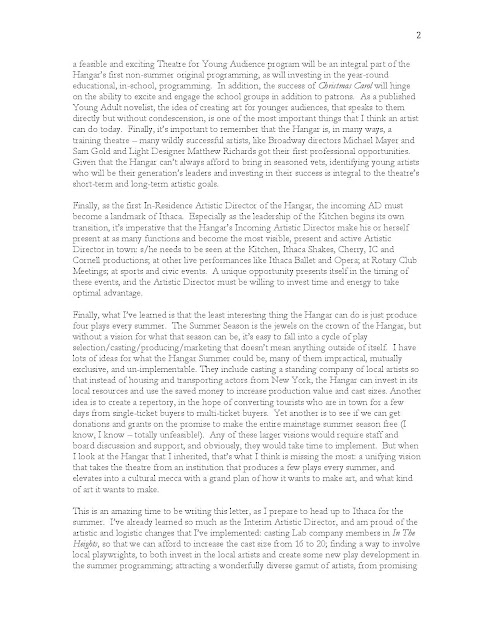 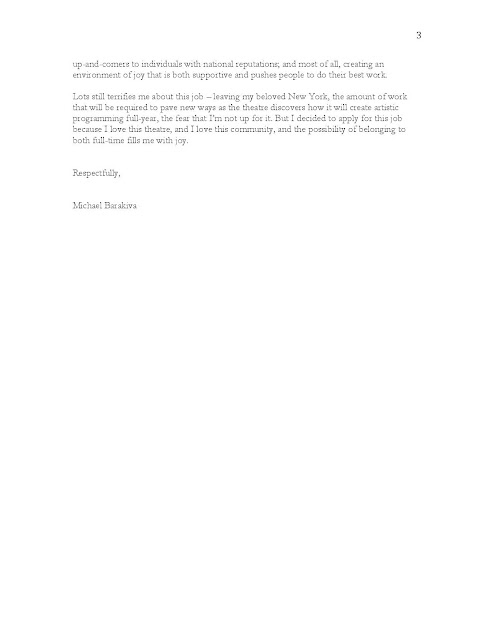 After receiving word that I’d made it to the semifinalist round, I met with Jessica Casey, Chair of the Hunt for the Next Artistic Director Committee , who gave me the salary range, which felt totally reasonable.  A short meeting with Managing Director Josh Friedman followed.  This meeting, I imagine, was longer for applicants who were not the Interim, and an opportunity for the theatre to describe itself, artistically and financially, to the applicants.  Ten of us had made it to the semi-finalist round. A few people pulled out at this point and a few more were eliminated.  Three of us made it to the finalist round.

My brilliant writer friend Bridget Carpenter gave me a great piece of job advice once: get the job, then figure out if you want it.  But here’s the funny do-si-do of applying for an Artistic Directorship: by the time you make it to the final round, you basically have to swear that you’ll accept the job if they offer it to you.  It’s a complicated relationship to navigate, because the theatre wants you to commit to it before it is willing to commit to you.  I’m not entirely sure this is equitable, but as the Pioneer’s former Artistic Director Charles Morey shared on my Facebook wall when I got the interim job (and I’m paraphrasing only slightly): “To be a great Artistic Director, you have to put the needs of the theatre in front of your own.”

I tried to keep this in mind as we entered the final part of the application process: the interviews.  The other candidates were flown into town on consecutive weekends. Because I was already here, the Hangar didn’t need to pay for my travel or housing – see, I was already a good deal! –  but all three of us were put through the same process.

Even having worked as the Interim for almost a full year, even after months in Ithaca and days spent prepping, I still wasn’t fully prepared for the rigor of these interviews.  Having never been a finalist for a job like this before, I didn’t know what to expect as I headed into the two-day process. This was the schedule :

And don’t be fooled: in this vocabulary, meal means “interview plus food.”

My initial meeting with the search committee went pretty well, as did my lunch with Adam Zonder, who was the Production Manager when I was here 15 years ago as a Drama League Hangar Directing Fellow.  It didn’t hurt that our relationship that summer had been surprisingly productive (I suspect Adam and I were two of the most surprised by this).  Education plays a huge role at the Hangar, and Helen, the Director of that Department, probably spent as much time telling me what direction she wished her department could grow as I did talking about the same thing.  Even though our desks had been next to each other, it was incredible how revealing dedicating time for a single purpose can be.   But since Helen and I ended up rescheduling our meeting, I ended up meeting with the Education Committee first. I had grown up in the McCarter Theatre’s Outreach Department. I’ve taught at inner city middle schools, high schools, and colleges across the country.  This was the committee meeting I was least nervous about.  At least, that’s what I tried to tell myself half-way through, as I was clearly bombing it.  I wish I'd spent more time actually thinking about what I'd like to do with the Hangar's Education Department.

To be interviewed by the people I’d gotten to know and like so much over the last few months was alternately enjoyable and awkward,.  And what I thought was my brilliant season was presented at the next meeting, but I was stunned when people didn’t fall over themselves telling me how brilliant they thought it was (I often feel that way, frankly).  The Finance/Development committee was kind – this was clearly my weak spot, and I felt like a politician, delivering empty promises with no idea of how to execute them.  During the cocktail hour/meet the community event the Board President’s children interrupted me by crossing to the refreshments intermittingly during my speech, which allowed me to cover for getting off track with some light banter.

The final events, dinner with Josh the Managing Director and lunch the next day with the board president, permitted a frankness that is difficult to muster on an every-day basis with the two people I probably had worked closest with as the Interim.

I hadn’t felt like I’d crushed it at the end of those 2.5 days.  If anything, I was surprised at how much more thoroughly I’d been forced to think about a job I was basically already doing and had already committed to accepting.  As difficult as it was for me, I couldn’t imagine how much harder it would be for the two candidates who came in from out of town: it got me thinking about how much I rely on context, like how much a board member’s history with the institution affected the meaning of a question she might ask me at any of the multiple interviews to which I’d been subjected.